I’m interested in what happens between the mind’s eye and the hand: the rendering of pattern. Turning what’s turned over and over again into a regularity and learning the math of it.
Where mind’s eye is not intent or what is forecast to be but instead a brief portent, a series of vague signs, the way color is different and somehow more after it rains where more is a beckoning, a promise that something will and is happening though you’ll likely never know what has become, only that space has opened for a becoming.
But only sometimes, on a certain late afternoon and never early evening, in a cast of light that suffuses and never glances and likely isn’t anything you’d think to call light at all.
A rarity. Trick of observation. A sign you can’t interpret but want badly to occur.
I’ve seen the flock numerous times while walking the same direction (westward) down the same street (Selby) to the same destinations—the co-op for groceries and jasmine oil, the café for a cardamom scone, the restaurant for tofu and eggplant and sometimes beef jerky with hot chili oil—and thought: the same, the same.
The same, until I’ve grown scared and pleased with myself, scared because I repeat the same patterns each week until I’ve become something that may never change, desire line turned rut from pacing.

And pleased because of pleasure from ritual, from the expectation of a regularity: jasmine oil applied before bed because it reminds me of a dark summer night waiting to come alive with strange pollinators winging toward the white flutes dousing the air with scent for the nearly blind, spice and salt that pools in the pores of my inner elbow and simmers there on a very hot day as I eat outside or in my apartment.
The southern light draws into a narrower line and vanishes.
An easiness. Looseness granted by pattern and a stuck form, waiting.
Waiting implies a sign will be seen. Avoidance and pleasure two sides of waiting.
The purple and orange glow of the air, heavy with pollution and northern wildfire, after the sun has gone. A flock of pigeons, grey and one white.
How many grey? I close my eyes to count them as they whirl into journeying and returning loops.
Six or seven. A shadow of the past eaten at its edges or remnant of uncorrected sacchade blots an accurate count. Until I paint each bird, and then I know what only looks right: eight birds.
And how? I lose the origin because I never had it, only noticing the birds once they’re aloft, though it’s downstage right. Northeast.
Up into the air, counterclockwise, then south in a wider and slower loop, and down toward the edge of a gabled roof on the northwest side of Dale Street.

Skittering down the slope until equidistant, nice bit of room either side.
Do I notice because I’m here, repeating my steps over and over? The same, the same. Do I notice because of the one white bird?
This habit–to see patterns, to latch on and make familiar, to make friend–is a pleasure and also born of fear, of needing an anchor.
Or drawing lines between myself and what’s seen suddenly and then again and again. Walking eastward on a January evening: Aldebaran. Westward toward Minneapolis: the ash tree linking the sky with the center of the earth in the synagogue’s courtyard.
Someday the birds will not be there.
So much around me changes, but I am here and here and here and there watching, accumulating signs and strange friends. In a holding pattern, broken by grasping what’s available. 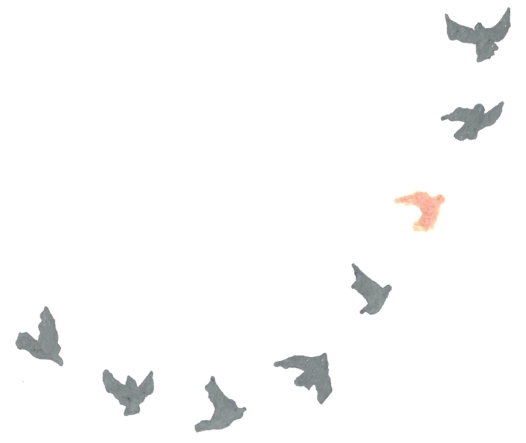 Natalie Vestin’s essays have appeared in Territory, The Normal School, Passages North, and elsewhere. Natalie works as an infectious disease researcher, and more of her illustrated essays can be found on her website (http://natalievestin.com) or on Twitter/Instagram (@natalievestin).