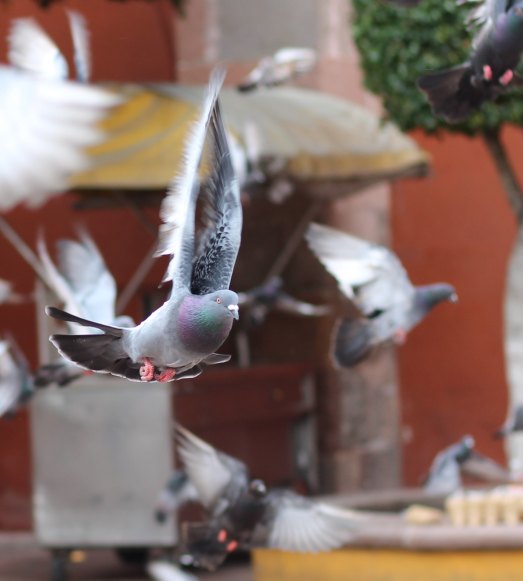 If we must imprint others, here’s the beak. If perfectly unnoticeable is symbiotic of what the world demands we hold, make this tongue from the corner of the donor-ID; powder the rest, stir in sand and rubber cement; make two sets of four-gripping toes I know are not toes but are not talons either. We do not know how to make lighter bones, so we will it a lighter heart. Her whistling matches its wispy breath, and because of its trust in her, it sings a mismatched tune ushered with our attempted harmony.

A crack in the spine frees a binding at the base of the wings. The tips stretch outward as it jumps from her hand. In the free fall, there’s a flutter in the chirps, a ping like a chipped dish. Our functional imperfection, grounded. Of course, I want to say. Who would expect the first attempt to be successful? I would kneel, if given another chance, would say, How is this any reason to quit?

In arguments, it is not our bird, but my wallet, my squawking delusion, and then here I am, apologetic, caught handling this broom she calls her giraffe’s tail. Look, she says, at how big my giraffe is and how real. She says, How can you not see? She says, How could you mistake this wallet as something other than stalled time, a stepping stone toward sheds and trees and the center of the blooming galaxy of some undiscovered paradox? In prolonged silence, I am forced to admit her giraffe is larger than any bird, but, I say, but how can you teach what to sing where there is no concept of song?

And then, the yak. And then, the rhino. And then, the prehistoric crocodile. And then, and then. All grand, all without a tune. What do you think of this, you stupid, silent bird? You forgetful, rawhide scrap? Look there, you useless burden. Look at that Kodiak with its might and its legs and its name. We’re nothing over here but garnish to another fruitless meal.

Flight is a pretty sound, especially in solitude, especially-especially when deemed impossible; it’s its own listless color, impossible to see next to all the other ordinary. Our language, another undefined occurrence, distinct only in the acknowledgment of met eyes, a diction of base understanding. Here, I call it pride. There, upon the limb, it’s called height.

Perhaps because of restlessness, the gifted warble of wings flies from my shoulder to a midway branch. It leans into the breeze, through the haze of trees, to the horizon beyond, and calls. The response is fast, but faint. As I prepare for the possibility it was only its echo, the bird flops to the earth as the decayed leather it really is. There, inside the folds, an egg-speckled stone. Another immeasurable weight.Another eternal lump to carry.

Similarly odd pieces by Timston Johnston can be found at WHISKEY PAPER, HOBART (online), HYPERTROPHIC LIT, and other admirable elsewheres. His latest soapbox lecture, “Close That Door, It Cost HOW Much?, and 70 Other Signs I’m Turning into My Father,” was unattended by his father. He sometimes tweets candy bar reviews @TimstonJohnston