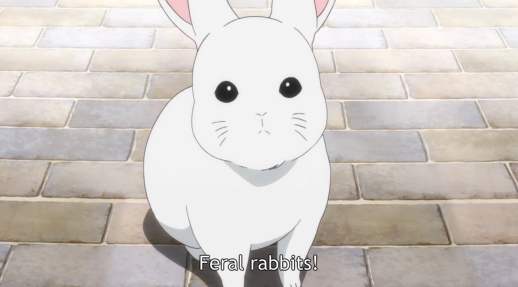 The rabbit’s nose twitches up, samples the air.
The poet’s pencil starts, stops, starts, settles.
The rabbit sprawls across the gravel.
The poet gives up with a sigh. She’s explored rabbits time and again, especially this one. She’s listened through its ears, lounged in its skin, sensed its desire to walk upright. She’s even gained its trust enough to allow her to stroke it on good days.
At some point, I would’ve held it.
She looks up through the window at the desert sky. Lingering shades of cottony pink fade from the edges of small random clouds. The house is silent. The radio died as the distant, pre-dawn sirens faded. She’s waited since, ready to document the moment.
Her wife chuckled at that.
What can be written in a heartbeat? Never mind the obvious.
Someone’s moaning outside, the sound drawing closer.
She squints against the clarity and shifts, her gaze first going to the rabbit, crouched now, ready to spring away. She leans forward, forehead touching the glass, and sees a boy on the street to the west, her eyes following him as he struggles past the house toward the east. Almost a man.Running, stumbling, limping toward the mountains. His face is wet.
Stop and smell the air, son.
Listen for a bird. Cherish the moment.
The poet glances at the bookcase, spines bearing her name.
Immortality. Once upon a time, a blink in eternity.
Her wife says something, and she turns, lays the pencil on the desk. They meet at the front doorway, their hands seeking each other, fingers fumbling, twisting, binding. Beyond the storm door, the rabbit has come to the deck, its nose twitching up at her.
Descend into a dream of tenderness, a heartbeat between souls…
She drifts with the memory of youth, the first poem published. She would freely, gladly share it with others, but who in this world still loved?
Light is coming.
Who would read?
Light is coming.
Who would listen?
Her wife opens the storm door, and the poet follows her out, realizing this is what she craved from the start, the inspiration required, but she’s abandoned the pencil in preference of the moment. The rabbit braces as they stand near, the barren wind kissing their faces like memories, a distracted mother shifting their hair, moving it from their eyes.
The poet kneels and cautiously reaches for the rabbit. It sniffs, assesses. One jerk, one awkward move, and it would be gone. But the poet slips her fingers around it, lifts and caresses it close as she stands. Her wife presses near, an arm slipping around her waist.
The rabbit buries its face into the poet’s blouse, its nose against her belly.
Light is coming.
The poet savors the breeze and counts the breaths of the rabbit and her wife.
Brilliantly, instantly—light blanches the sky.
The poet turns into the wife’s tightening embrace.
The rabbit sinks its teeth through her blouse into flesh.
The mountains melt.
Eternal.
Unborn.
Stardust.